A downloadable game for Windows

Submission for the Bruised Egos Game Jam, starring Izil the owl pirate. Izil and the Winds of Change is a third-person action-adventure game in which you explore tropical islands in search of Izil's lost captain, both on foot and in command of a ship.

I just uploaded a version (v1.1) that fixes these issues, mostly because I didn't want such an easy soft-lock in there. But since it's after the deadline, I'm leaving the original up for now in case you would prefer to make your judgment based on that version.

Sound design and bug testing were the last two things I was able to do (and not fully), so I apologize if neither of those are quite finished. The sound design definitely isn't done. As far as bugs, I think I got a lot of the big ones, but I'm sure there's still a lot of ways it can break.

Note (Kyle Bosman): I have the licenses for the music in the game, which includes both games and streaming video. I don't think it would cause a problem if streamed, but I wanted to let you know in case you're not comfortable with that. Especially since it's your channel and you know better than me in that regard.

And finally, to anyone who plays this, even if you don't like it, thank you! I truly appreciate people spending even just a little bit of their time with something I made.

All of the game's logic was written by myself via Unreal Engine 4's visual scripting language. Assets were a mixture of completely original, pre-made, and some that were a combination of the two.

For instance, all of the characters (Izil, Schippie, Zorglobe, Captain, and Chicken) were made from beginning to end by me (outside of the original concept design for Schippie and Izil).

Things like environmental assets (foliage, water, landscape textures, some props, particle effects, etc) were mostly pre-made from various asset packs (listed below). Most of these were also freely provided by Epic, and some were previously purchased. However, things in these categories I made myself were the item chest, message sign, boost pad, collectible ring, event start/end trigger, bullet hell attack, shockwave attack, small rock wall, and the mama juice can.

Then some things were a combination of the two like the ship. The base geometry itself was from an asset pack, but I made the materials and animations.

Sounds effects and music were all acquired from external sources. The UI was done by myself. If you have any specific questions about any of this, please let me know. 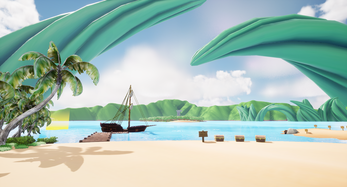